At one point, the only thing that your phone had to do with gambling was to call the local bookies to place a few bets.  Today, gambling and phones operate very much as one.

Mobile casinos now feature roulette, blackjack, slot games and sports betting and bets can be placed at the touch of a button.  As well as this, the graphics are sharp HD and animated.  The emerging market has massive potential.  Smartphone technology is rapidly developing as well as the plethora of games and applications that can be used. 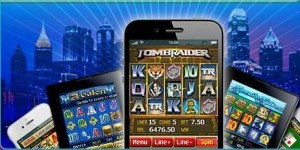 Having the option to download new games to our phones has opened up a world of opportunity to us.  Games such as Angry Birds may have set the record for the number of mobile downloads, but mobile betting apps will likely be catching up soon.

Imagine back to the days when the most sophisticated game we could play was snake.  Think how things have progressed from there.  The standard of gaming as it is today must be unimaginable back in the days of Nokia 3310s.  It is not 14 years since that phone and things have changed a lot.  Phones are now machines, with powerful processors and intelligent hard drives, running iOS and Android operating systems, which can support nearly all computer functions, one of which is hosting an online casino.  The advanced internet connection we now have on the move means that we can connect to any information around the world from wherever we are.  You could be playing a game of online poker with people situated all over the globe.

The mobile gambling market is one that is always going to be fuelled.  Whatever happens, there will always be people willing to risk a couple of pounds for the chance of a big win.  The launch of mobile casinos has made it even easier than ever to place that bet.  You can quickly download an application of, if the site allows, simply play directly from their flash-based site.

Along with the rise of smart phones has come the surge of tablet computers.  This do not have the portability of mobile phones, but can be used as a much better replacement for a desktop or laptop computer.   Many people are now opting to buy tablets instead of computers.  The latest tablets are capable of handling nearly all the functions of a desktop computer.