Loads of FREE spins to take!

Jimi Hendrix’s legacy is synonymous with being a rock star, but this man created some truly iconic pieces of music during the late-60s and early-70s. Well, fans of the legend will be delighted to learn that NetEnt has created a Jimi Hendrix slot machine. You can find it now at the casinos below.

NetEnt’s Jimi Hendrix online slot has one of the most beautiful visual designs ever seen in casino software. Set against the backdrop of a warmly toned desert, the visuals have been created with a cartoon style channelling the flower power era. And then the entire experience comes to life beautifully when symbols are matched and music is playing. 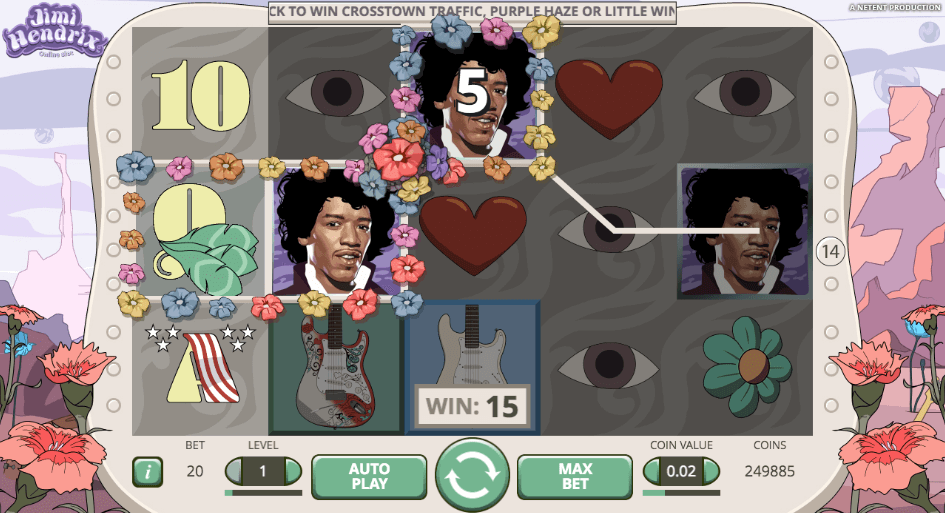 By design, Jimi Hendrix is a slot made with three and five reels, which allows for 15 symbols to be displayed. Overall, there are 20 paylines that are fixed in nature and, thus, will remain active on each and every spin.

Given the fixed paylines, players can make a minimum £0.20 stake because the coin value starts at £0.01. At the top end, the coin value can be £1 and the betting level can be 10. As a result, the largest possible wager for high rollers can be £200.

This is the most important section of this Jimi Hendrix slots review because the game is loaded with special features. First up is the Purple Haze Feature, which players can trigger by landing this symbol on reel on. This will result in 10, J, Q, K, and A symbols transforming into wild symbols for one spin.

Coming next in the line-up is Red Guitar Re-Spin, where players will receive a re-spin when four or more red guitar symbols land on the screen. For added value, this feature will be re-triggered if other red guitars appear.

Pick and Click is a bonus game that will take to the stage when three scatter symbols land on reels three, four, and five. After launching, players will have the chance to win one of four prizes:

Considering the visuals and music, this slot is best enjoyed as an experience. By lowering your stake, you can increase your gaming time and then benefit from the sizeable back catalogue of special features and rewards.

Jimi Hendrix is the second slot release in the NetEnt Rocks Series and it is a second triumph for the igaming developer. Overall, this is a superbly made video slot that shows just how good NetEnt can be when it brings it’s A-game. The only possible improvement would be to add even more Jimi Hendrix songs.