Slot developer NextGen Gaming has created a fantasy-driven game that features Merlin, a legendary wizard described in English myths and tales. When playing the game, players can conjure winnings in numerous different ways. Try it for yourself at the sites below.

rand Ivy is willing to award 100 free spins and up to £1,500 over new players’ three initial deposits. more...

Merlin’s Millions has been designed as a five-reel slot, which is pretty familiar, but how it differs from other games is that NextGen has included an extra row. As such, there is space for 20 symbols to appear to land on the screen. During the gameplay, players will see a vivid palette of colours whiz up and down the screen. 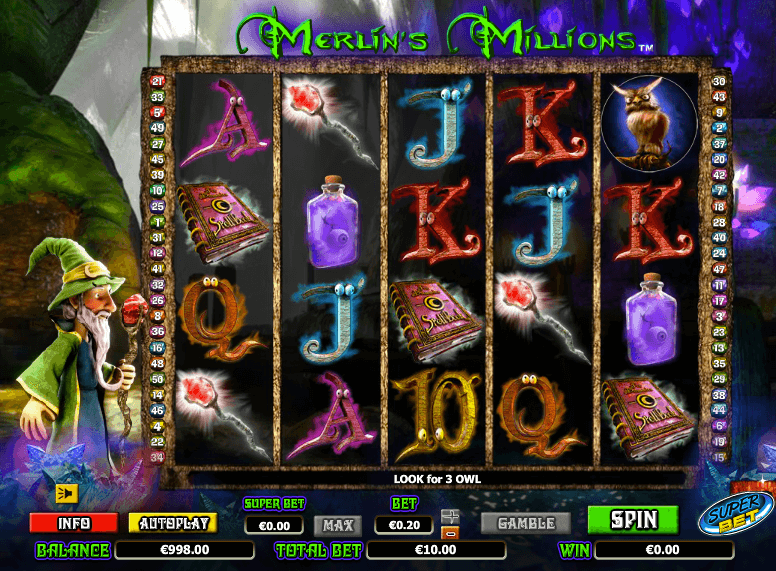 NextGen has integrated 50 fixed paylines, meaning players do not have the ability to adjust them. For wagering, this means that players can stake a £0.50 minimum because of the £0.01 lowest payline value. Meanwhile, the largest line bet of £0.20 will allow for a £10 maximum, which is incredibly reasonable compared to slots that go past £100.

In this Merlin’s Millions slot game, the most obvious feature is called SuperBet. For clarity, this is a standardised feature shared across a number of NextGen slots. By activating SuperBet, players can receive larger multipliers in return for placing larger stakes. This can result in players obtaining 2x, 4x, 6x, 8x, or 10x rewards.

Merlin appears as an animated character at the side of the screen, but can also land on reels two, three, and four as a stacked symbol. This can extremely helpful as Merlin’s Millions has an extra row of symbols that most slots do not have.

Look for the blue orb as this is the scatter symbol and will trigger five free games when three land simultaneously. During this feature, Merlin will suddenly become animated and perform an enchantment to convert symbols into wilds.

There is a second scatter symbol in the form of an owl. When three of this scatter symbol lands at the same time, players will get to pick their favourite owls to win cash prizes. Make sure to press collect as a bad pick will end the feature.

SuperBet can appear to be a lucrative feature, but can prove to be a drain on your funds if you go a few rounds without winning. Instead, it is wiser to be patient and wait for one of the two bonus rounds to be unlocked.

Merlin’s Millions can be draining with its 50 paylines, but this will quickly be forgotten when the bonus rounds are unlocked. From a design perspective, this is quite a good job and will help to fuel NextGen Gaming’s continued rise.