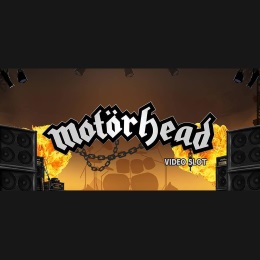 Up to 100 free spins at Kaboo casino - mobile optimised.

The NetEnt Rocks series welcome its third release with the Motorhead slot machine. Previous releases in the series have included Guns N’ Roses and Jimi Hendrix, but now rock fans can spend a little time with the legend that is Lemmy.

A chanting crowd sets the scene before players see lead singer Lemmy takes the stage and the entire band kicks into the iconic song that is Ace of Spades. The dark visual style of the intro video is then carried into the slot interface, with the sound equipment and symbols providing the colour. In the options, players can choose Rock Mode to start playing music.

But the more eye-catching aspect of the design is that Motorhead slots do not have a standard interface. Granted, there are five reels, but reels three and four have an extra symbol, while reel five has an extra two. Overall, this gives Motorhead four extra symbols compared to the average slot. 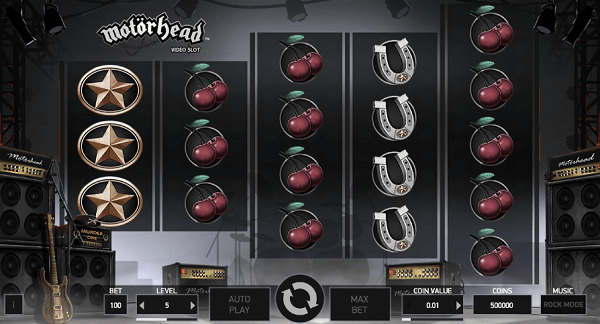 The coin value forms half of the wagering control, with players able to set this between £0.01 and £1. Then comes the betting level, which ranges from one to 10. Broadly speaking, this enables players to stake just £0.20 per spin, while the largest is £200.

The iconic Ace of Spades is used as the wild symbol that can substitute for all others, barring the scatter, which is a screaming demon designed in gold. Land three scatters on reels three, four, or five and the reward will be three or more free spins.

Mystery Reel comes next and will apply randomly to one of the reels, except when Bomber mode is active. When the reels stop, any mystery symbols left on the screen will morph into a different symbol (not scatters) stacked on the entire reel.

The Bomber Feature is also triggered at random, but will cluster mystery symbols. The great thing about this feature is that it can happen all over the reels and create at least 10 overlay symbols, with Mystery Reel then starting.

Motorhead lacks the major multipliers of other video slots, but this is because the game has a higher variance design. Basically, this means more payouts but at lower values. Tactically, you are best off setting a steady wagering value and trying to build up winnings with the aid of the special features.

This Motorhead slot review can confirm the game is a worthy release in the NetEnt Rocks series, even if it doesn’t quite hit the heights of Guns N’ Roses. This being said, Motorhead is effective at delivering a steady stream of smaller wins.