Pirates have been en vogue ever since the Pirates of the Caribbean films arrived more than a decade ago to blow our minds. The latest to pay homage to the theme is AppAsia Studio, which is a software developer behind the Pirate Kings game for smartphones and tablets.

AppAsia Studio is by no means a powerhouse in the mobile app world, but the developer has created a slot experience that is better than that of many casino software specialists. The graphics never strike you as complex, but the AppAsia has shown a solid work ethic to develop entirely unique symbols using popular pirate imagery.

Pirate Kings is a five-reel slot with three rows, displaying 15 symbols per spin. The 20 paylines are not fixed and can be adjusted to players’ preferences. This just-for-fun slot will then let players set their stakes in multiples of $100 up to £60,000 (please note: the conversion rate does not matter, given the free-play nature of the app. 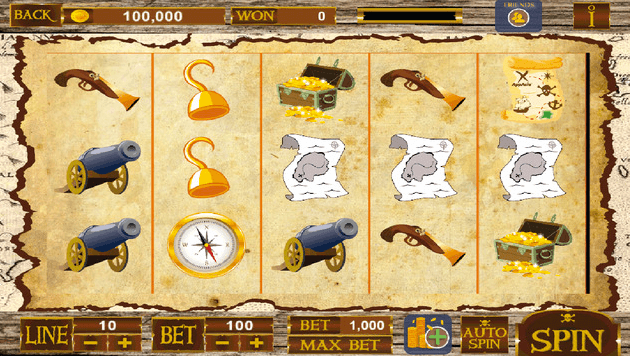 Considering the pirate theme of the slot, it is surprising to see that players can switch from piracy to the Chinese New Year or Easter. Choice is often a good thing, but this does not feel necessary in a pirate slot. A stronger feature is that players can connect with friends over Facebook.

Pirate Kings free spins represent another good feature, with players able to hold back their own funds. For the more daring players, it is possible to gamble winnings in a side-game. Basically, the reward is a 2x multiplier for guessing black or red and a 4x boost for predicting the right suit.

There is not really a major need for Pirate Kings tips, as the app is designed to be free and fun. For these reasons, you should avoid spending on the in-game apps because this will translate as cashable winnings. Instead, just make sure to wager responsibly to ensure you do not run out of free funds.

Hook’s Heroes is one of the best pirate slots ever to be created. Designed by NetEnt, this is a delightful experience made using cartoon graphics and filled with superb features. When you consider NetEnt’s superior budget and Hook’s Heroes real-money design, these are two very different experiences and the best choice depends on what you really want.

Good pirate slots are not overly common, and IGT is one developer that could draw inspiration from Pirate Kings. Thus far, Treasures of Troy is the closest IGT has come, and even then it isn’t the right theme. Ultimately, Pirate Kings is superb for free-play and social connectivity.