Will this slot game reveal some ‘reel talent’ in you? The talent show theme has been done before, but there are some great twists in this version. Will you be a winner if you play it today?

Where can you play Reel Talent?

This is just one of many top slots at Top Dog. You can also look forward to a packed bingo schedule once you become a member.

Could you be lucky playing some of their entertaining slot games? Try and snag some free spins on their Mega Reel if you sign up today, so you can make a strong start.

Who created the Reel Talent slot?

This game comes from Just for the Win. Not the best known of developers, but they’ve produced these games as well:

They’ve also made sure the Reel Talent slot mobile version is just as easy to play as the one designed for larger computer screens.

The basics of the Reel Talent slot

Here’s what to expect if you decide to play the game: 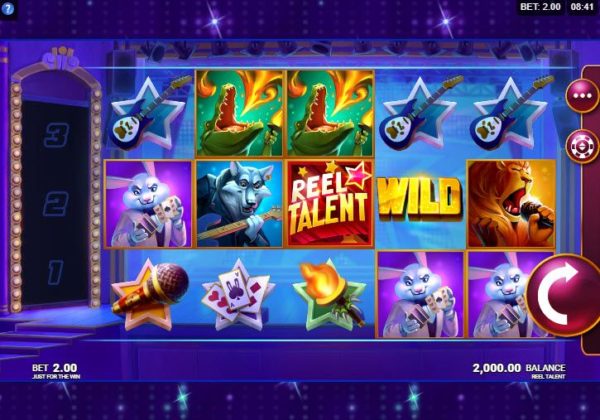 All the lines must be played, but it only requires a very cheap bet to cover them.

Worth using a strategy?

With fixed lines in play, there’s not much you can do to create a strategy here. Just read the rules, play the game, and hope for the best. A low bet – especially at 10p for 20 lines – is the best way to go.

Reel Talent key features to look out for

This is where the ‘reel’ fun starts!

To the left of the reel set, you will see a Symbol Storage meter that is three icons high. Here is how it works:

The Super Spin means only the collected symbols will appear on the reels. There are three possible spin types:

Therefore, the prize possibilities get better the further through the stages you go.

Does the game feature a good design?

Definitely – it takes place on a stage and the various animal performers are all showing off their acts. There are microphones, playing cards, and guitars among the icons too. The theme works well within the game, making Reel Talent a certain hit among slot game fans.