Could you spot a reptoid? Not a question you’ve ever considered before, I’m sure. You will get the opportunity to test your skills if you try your luck with the Reptoids slot game though. 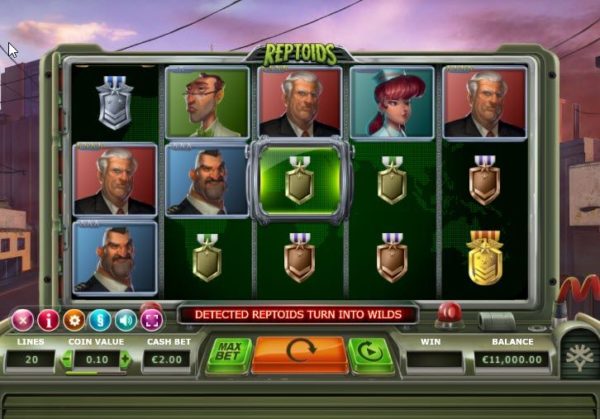 Where to play this game

Who created the Reptoids slot game?

Yggdrasil Gaming might sound like a mouthful, but they’re behind the release of this game. Maybe you’ve played some of their other titles:

Expect lots of detail in most of their games, Reptoids included. They do like to include some innovative features, as you’ll see here.

Things you should know about the Reptoids slot

If you’ve played their games before, you’ll recognise the game controls at the bottom of the reel set. The ‘i’ hides the paytable.

Strategy or no strategy?

Fixed paylines mean there is little to do here except choose your bet. With that said, the smallest coin is half a penny per line. Betting 0.005p per line means all 20 lines are covered with just 10p per spin, making all budgets stretch further.

Special elements included in this game

Are you ready for a fascinating ride? There are wilds and scatters here, but they don’t work as you might expect them to…

As you begin play, you’ll notice a detector frame moves around on the reels. If it lands on a character once the reels stop spinning, you’ll see them shown as a Reptoid. Don’t worry, that’s a good thing – all appearances of that character turn wild for that spin.

This is a gold coin and it’s labelled too. Here’s how it can produce prizes:

The scatter can therefore produce some huge prizes. You will also get the chance to uncover a bonus with its help.

Normally, you’d need three or more scatters to trigger this. However, this time you must secure one scattered coin in the detector frame. Here’s what you can expect when this happens:

The game is very appealing, and the detector window focuses your attention in a different way. With the potential for different characters to appear as wilds, this game takes on a different format to many others.

We love alien themes and this one from Yggdrasil Gaming is one of our favourites. Look out for that coin to appear in the detector window to win those free spins. The reptoids can make things a lot more interesting in this part of the game too.