Sherlock Holmes has been a constant presence in popular media in recent years. Whether in the past, present, or New York, the legendary detective does not fail to find an audience. The literary character’s latest appearance comes by way of a mobile slot that InTouch Games Ltd has developed and which can be played now at mFortune Casino.

Sherlock: Murdered to Death is the name of the slot from InTouch Games Ltd. The slot has been intricately designed and will see Sherlock figure out a fresh nemesis from his Baker Street address in London. The visual quality of this Sherlock slot has to be commended, as it really serves to set it above the standard of many other new mobile slots.

Packed bookshelves surround the slot’s core interface, helping to conjure the mental image that players are in Sherlock’s flat and that they have an array of information at their disposal. The symbols have also been carefully designed, but a special mention has to go on the buttons that control the game. These appear to be steam-punk influenced in style and blend nicely with the Sherlock Holmes universe. 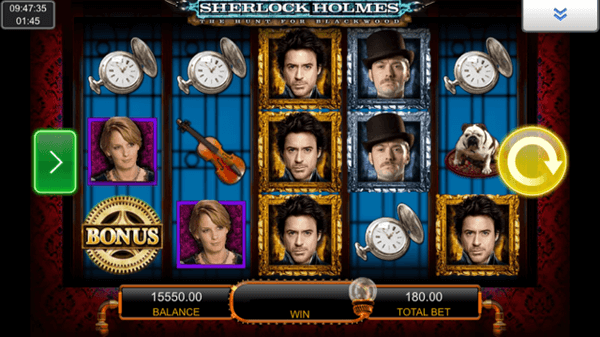 Learn How to Play

InTouch has wisely implemented the classic video slot style of five reels and three rows. This ensures that the slot can function on smartphones and tablets, and this helps for the slot to be more accessible for players. The 15 paylines are perhaps on the low side, but this also means that it is more affordable for players who want to activate all of the paylines.

On that note, players have the ability to control how many paylines are active for each spin. More impressively, though, it will be possible to set the exact line bet between £0.02 and £0.10. The values then increase in £0.10 increments. Having this level of control is extremely uncommon among video slot and is one of the most impressive strengths of Sherlock: Murdered to Death.

Find the Lady is the first of two bonus games and it will challenge players by encouraging them to sole the mystery to win a cash prize. Two or more question-mark symbols will let players hunt along a trail in search of clues and winnings. Click collect at any time to claim the current winnings.

Two or more criminal symbols will trigger Clueless, which is the second bonus game contained within the Sherlock slot. This entails identifying a criminal, weapon, and victim in an attempt to claim a multiplier bonus. Sherlock will also give players the opportunity to gamble their winnings after any spin. The maximum reward during the gamble feature is to win a 15x multiplier.