Spice Girl Mel B is a welcome addition at Costa Bingo

Costa Bingo has launched a brand new advertising campaign with a bit of pure Spice. Adding Spice Girl Mel B to its array of campaigns is sure to get players excited. Costa Bingo is making a conscious effort in increasing its presence in the UK market. Using a Spice Girl is an ideal opportunity for both parties as Mel B is of course well known over in the UK than in other countries.

This specific campaign has been commissioned by BGO Entertainment which has ploughed a staggering 12 million into Costa’s Multimedia strategy. BGO Entertainment is keen to establish Costa Bingo as one of the biggest online bingo brands in 2014. Starting with a brand new TV advert.

The new campaign with Scary Spice has recently just launched in the past few weeks on New Year’s Day. The TV advert shows Mel B walking on top of buildings and commenting on how Costa Bingo’s new jackpots are massive. Mel B is seen in the advert towering over London landmarks and making pedestrians scream and sending them for cover at Costa Bingo.com. Mel B is then seen reaching for a tablet to play on Costa Bingo.

Costa Bingo’s co-founder, Richard Skelhorn recently stated that he would like to see Costa Bingo as one of the leading top bingo brands this year. Mr Skelhorn also commented on how growing his business is a top priority. With Costa Bingos KPIs substantially higher than many of their competition, Costa Bingo has the prime opportunity to strike while the iron is hot.

Mr Skelhorn also says that his team of world class operations will no doubt deliver outstanding work in order for Costa Bingo to reap the rewards in terms of additional interest garnered by the campaign. The company feel it is in the best interest to take Costa Bingo to the next level. The Mel B campaign will entice customers to the door and keep them with Costa as the amount of different promotions and bonuses they offer is in no way short. 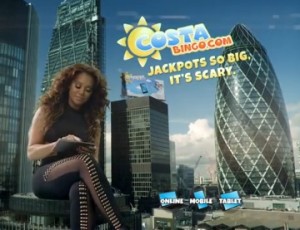 How will Costa Bingo’s profile change?

The new Costa Bingo Campaign will see the businesses profile rise with its TV presence. Profits with the help of the TV campaign will most definitely provide a rise as the exposure of TV has huge potential. Having an ad campaign with a celebrity also will have a huge effect as Mel B is world renowned and people will be interested in what businesses a famous Spice Girl is campaigning for.