Starburst is arguably the best-known slot that NetEnt has ever created. Across NetEnt casinos, there are numerous opportunities to claim Starburst slot free spins, like at one of the sites showcased below.

Join Top Dog for to receive up to 500 free spins on Starburst. more...

Lucky Admiral showers you with freebies as soon as you deposit: spin the wheel to win up to 500 free spins on Starburst. more...

Starburst eschews story for a slot experience that is focused on the winnings. Set in a serene galaxy, Starburst is loaded with precious stones that glitter in their space-based setting. Those stones will become extremely important when players try to create winnings paylines on Starburst’s five reels.

Starburst is designed with 10 fixed paylines, but these have double the potential because those lines have the ability to pay both ways. As such, Starburst effectively lets you cover 20 paylines at half the cost of wagering.

When making wagers, Starburst will enable you to assign a betting level of one to 10 and coin value of £0.01 to £1. You only have to stake £0.10 for the lowest possible bet, whereas the maximum will be a lofty £100. 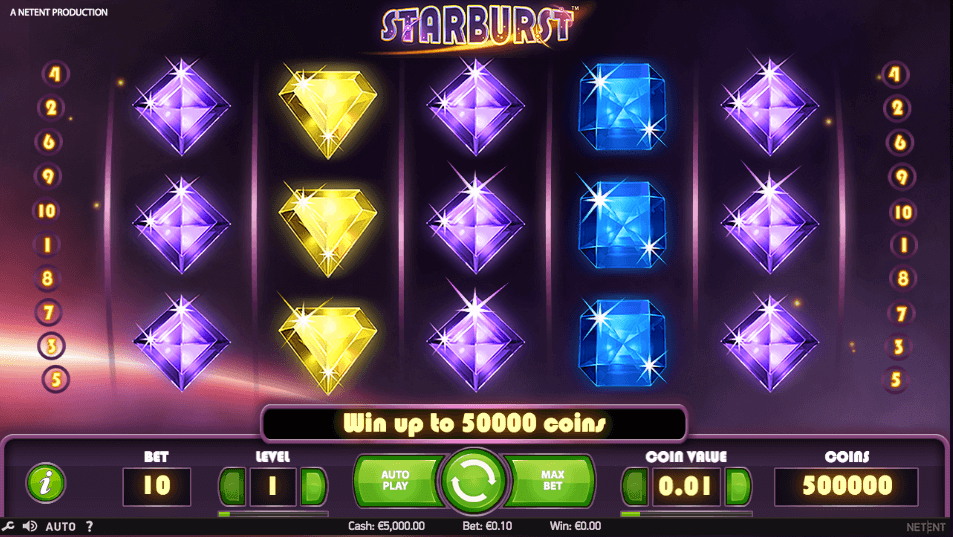 Starburst is clear in conveying the fact that you can win up to 50,000 coins, which is an important reason why this mobile-compatible slot has proven so popular in recent years. Bar is the most lucrative of the symbols, with the slot awarding a 250x multiplier if five Bars land on one spin, while five 7s are worth 120x.

Winning both ways is not the only special feature, with Starburst Wilds being the core bonus feature. For reference, there is no bonus round, so the focus is on Starburst Wilds. These symbols are the multi-coloured flowers with eight sharp tips.

Starburst Wilds can land on the second, third, and fourth reels. After appearing they expand to cover the entire reel and trigger up to five re-spins, all which plugging gaps in the paylines.

This section of the Starburst slot review will give you some advice on how to make the most of the game. Fundamentally, this is a slot where you can build up winnings at a high frequency, but they will be at a lower level than other video slots.

The maximum multiplier of 250x is by no means enormous, so your strategy needs to centre upon securing winning streaks and trying to make more than you are collectively wagering. As such, you might want to stake a little more than normal because the two-way nature of the 10 fixed paylines will lessen the risk considerably.

Starburst does its job effectively, which is to provide a simple but visually crisp slot game that can be enjoyed on lots of different screens. NetEnt has made a number of big-budget slots where story is at the core, but Starburst continues to demand attention because of its affordability and superbly uncomplicated design.