Twin Spin Deluxe is a sequel to the original slot game that was launched at NetEnt casinos in 2013. This iteration was newly released for 2018 and will give you an even larger gaming interface compared to the first Twin Spin slot.

If you are on the lookout for Twin Spin Deluxe NetEnt sites, then look no further than these standout online casinos:

Become a new depositor with Top Dog Slots and you can win up to 500 free spins from your turn on the Mega Reel. more...

Board the good ship Lucky Admiral and you can receive up to 500 free spins after making your first deposit. more...

NetEnt has the Twin Spin Deluxe slot in a similar retro-neon style to the original, which was made with five reels and three rows. However, the sequel goes much grander in scale by giving you an incredible six reels and five rows. 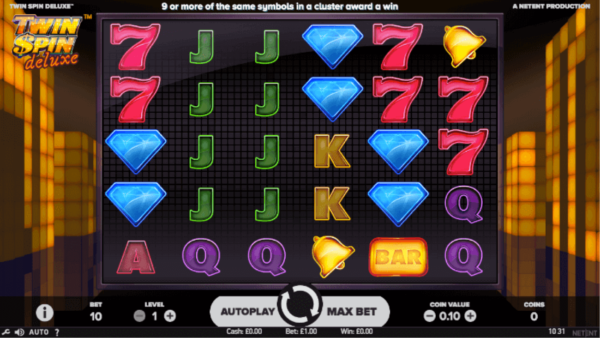 As a result, there are now 30 symbols compared to 15 in the original. Despite the expanded slot interface, Twin Spin Deluxe is fully playable on mobile devices running on Android or Apple iOS.

Twin Spin Deluxe uses NetEnt’s trademarked Cluster Pays system rather than paylines. Quite simply, you need to match symbols in conjoined clusters across any of the reels. Payouts start from nine symbols or more, so you should be able to win frequently enough.

Even still, you need to think about stretching your budget to have many more chances to win. By setting £0.01 as the minimum coin value, you can spin from only £0.10 on Twin Spin Deluxe. On the flip-side, Twin Spin Deluxe can let you wager £100.00 with a £1.00 coin value and a betting level of 10 assigned in the settings.

NetEnt has spared no expense by designing a slot for which the maximum jackpot is 100,000 coins. Triggering the full jackpot will be tough, but there are some other favourable payouts to be won from matching 30 symbols in a cluster across the six reels:

Most of the development efforts have gone into making the base game, and this is not a decision that should be criticised, as NetEnt has produced countless slots that have been given a tremendous focus on bonus features.

The lone special feature is called Twin Reel. This is when identical twin reels appear adjacently on any of the six slot reels displayed. After beginning a spin, the twin reels can expand to become perfect matches across all six reels. Naturally, it is much easier to generate winnings whenever this bonus feature kicks in.

The Twin Spin Deluxe RTP has been assigned as 96.61%, while the variance falls between low and high. Considering all of the information available, here are some useful tips to embrace in your strategy:

Twin Spin Deluxe is a great mobile slot to experience if you want a game you can jump straight into on your smartphone or tablet. First and foremost, this is a streamlined experience in which you will not encounter story elements and associated bonus features. If you want a retro slot for the modern day, then give Twin Spin Deluxe a shot.