It doesn’t have to be Halloween to appreciate the colourful characters who appear at this time. In fact, the Which Witch slots are extremely playable no matter what time of the year it happens to be.

Play Which Witch at mFortune

The Which Witch slot is exclusive to mFortune Casino and cannot be played anywhere else. And you can sign up for £5 free no deposit and a 100% welcome bonus.

Which Witch is intricately designed using cartoon graphics, with the artists having devoted care and attention to designing the green and white witches, not to mention their lair and the various items they depend on for brewing potions and carrying out witchcraft. 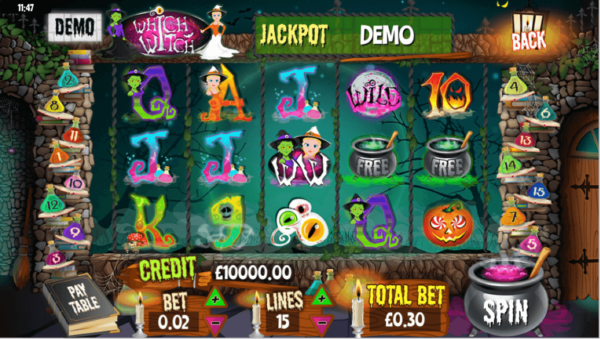 From a more technical perspective, Which Witch has been crafted with five reels and three rows, thus allowing for 15 symbols to land on screen. And the slot game does display extremely well over many mobile devices, including smartphone and tablets running on iOS or Android. For reference, you will have to download the mFortune Casino app to play.

Your wagering decisions are going to be impacted by the presence of 15 adjustable paylines next to a betting system that allows for you to stake from £0.02 up to £95.00. So, if you want to be able to spin with all lines active, then it is going to be a £0.30 stake.

Which Witch is mobile slot that comes with some highly rewarding multiplayer payouts, but you will have to brave icky eyeballs and spooky pumpkins to build up some truly impressive earnings. These are the highest multipliers earned from matching five symbols in the base game:

Developer Intouch Games has gone to spectacular lengths to make sure that Which Witch is also an engaging slot game in terms of bonus features. In fact, there are some extremely appealing outcomes to possibly unlock:

This Which Witch slots review is now in a strong position to provide some strategic advice. Most importantly, you should try to wager with all five paylines, as this gives you a greater chance of triggering the bonus features. In addition, there is a greater likelihood of you being able to gain from the basic bonus features rather than the progressive jackpot.

Which Witch delivers yet more evidence that Intouch Games is flying under the radar as one of the best mobile slot developers in the business. In Which Witch, there is a clear style that has been well-executed, the mobile compatibility is top-notch, and the core gameplay and bonus features keep you coming back for more.