Atlantis is a fictional island state, but some people believe that it actually existed, with leading scientific minds even devoting research to exploring the possibility. After researching this concept, NetEnt has developed its majestic Secrets of Atlantis slot.

Top Casinos with Secrets of Atlantis

The prospect of £3,000 worth of bonuses and 100 free spins will give you the dream start with Spin Station Casino. more...

This VIP casino will give you a stylish welcome when you snag the welcome offer of 100 free spins and £1,500 worth of bonuses. more...

Legend has it that Atlantis sank below the Atlantic Ocean, which is precisely why this video slot takes place on the seabed. Ruined stonework can then be glimpsed in the background, while undersea animals and gems are used for symbols. As for the interface, NetEnt has built the slot with five reels and four rows, which allows for an expanded 20-symbol setup. 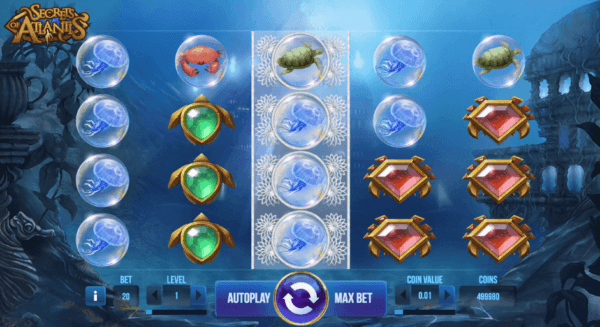 Wagering can be set by adjusting the Level option from one to 10 on the left of the screen, while the Coin Value is on the right and will let players go from £0.01 to £1. These options will allow for minimum spins of £0.20 and maximum spins of £200.

Secrets of Atlantis has been made with 20 paylines, but NetEnt has added a win both ways feature, which means that players essentially have 40 paylines and only have to pay for 20. The video slot is lacking in high-value multipliers, with the clam symbol offering 400x when a perfect match of five symbols is created. Overall, players can win up to 320,000 coins.

The Highlight feature appears randomly on every spin and will impact positions on the second, third, and fourth reels. At the end of a spin, the Colossal Symbols Re-spin feature will begin if an entire reel has been highlighted.

In this feature, the second, third, and fourth reels will combine to create one reel with a Colossal symbol. Having a re-spin with this enormous symbol will make it even easier to earn winnings. It will even be possible for the Highlight feature to trigger a subsequent re-spin.

The Nudge Wild is a glamorous mermaid who can cover four rows when she fully appears on a reel. When the Nudge Wild partially lands on an active payline, she will be moved up or down to cover the entire reel.

Secrets of Atlantis is not blessed with opportunities for large winnings, but it is possible to win quite frequently at lower values. As such, this is a slot where players will need to spin for longer to build up winnings.

To close out this Secrets of Atlantis slot review, players need to be aware that the game looks great on all major devices, while the gameplay has enough features to create winning opportunities, but there is a lack of high multipliers.