Was that a white rabbit I saw? Are there twins on the reels of this game? Hmm, there are some familiar elements playing into this slot game, as you’ll soon see.

Where can you play the White Rabbit slot?

You’ll immediately notice this is not your average slot game… 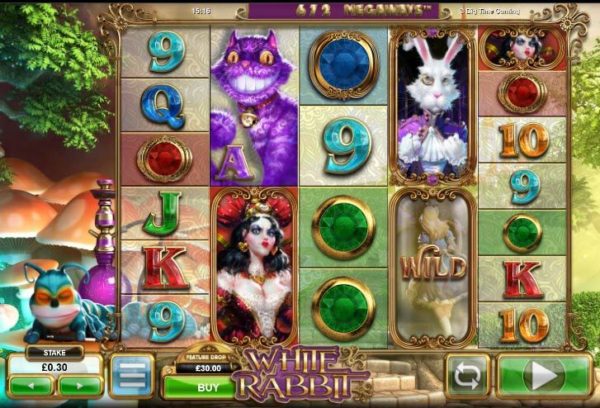 The RTP for the game depends on whether you buy the Feature Drop. This means you can buy your way into the bonus if you wish.

Could you try this game with a strategy in play?

This game is clearly inspired by Alice in Wonderland. It’s not the first to take that route either. We’d suggest opting for the minimum stake per spin without going for Feature Drop as this is pricier.

Only those with bigger budgets may wish to pay for the feature rather than waiting to see if it drops on its own.

Main features of this slot

This is the white rabbit of the title:

The caterpillar may randomly contribute up to four wilds on the screen in the base game.

Awarded for finding three scatters. Here’s how they work:

The game benefits from a superb design that pulls you in. The extending reels in the free spins feature are great as they give you more ways to win. Feature Drop gives you more control over how you play, but use it wisely if you are thinking about doing so.