Chinese people have played Pai Gow for centuries, whereas Sam Torosian created the poker variant while he was trying to promote a Californian casino during the 1980s. Before starting to play, you can use this guide to understand the rules of Pai Gow poker online and how it compares to other variants.

This is a bona fide heavy hitter when it comes to bonus funds. Basically, this is because the Grand Ivy Casino has £1,500 in bonus funds and 100 free spins. more...

The classic game is played with 32 dominoes, where the poker version uses playing cards. Ultimately, both versions differ greatly from one another, so take the time to understand the rules, strategy, variants, and house edge for greater clarity. 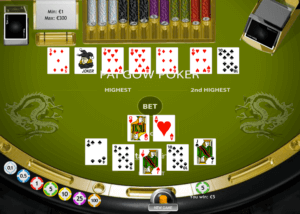 Pai Gow poker was designed to be played with the standard 52-card deck along with the joker, which is included to serve as a wild symbol. However, it is limited in that players can only use the joker to create a pairs of aces, straights, flushes, and royal flushes.

The simplest thing about learning the game is that intermediate poker players will understand the ranking values of each hand. In fact, the only major divergence is that A2345 is the next most valuable hand after the royal flush.

In each round, players receive seven cards in all. There is no opportunity to switch cards, so players will have to use the cards they have. After receiving cards, a player creates a hand of five cards and one of two. Crucially, it is not permitted for players to use a stronger pair in their two-card selection.

When it comes to deciding the winner, this is the player who wins on both hands, which results in an even-money payout. Alternatively, it will be a push if there is a tie or an outright loss for being defeated in one hand – this is the more likely outcome of the two.

At the most basic level, the most important element of Pai Gow poker strategy to consider is the value of each hand. The rules dictate that the higher pair cannot be in the two-card selection, but, at the same time, this needs to be a large enough value to ensure that the dealer does not sneak a tie and deprive you of the win.

In popular poker games, players are delighted when they receive multiple pairs. However, this is actually an instance when you do not use the traditional strategy in Pai Gow poker. Okay, let’s say that you have three pairs. In this case, the best way to play is to use the highest pair in the two-card selection, as the two pairs will still be higher. As a result, you will have a much stronger chance to win.

In this section, you can compare the main variants of Pai Gow and poker to obtain a deeper understanding of how to play the game. Check out the subsections below for details.

For players who understand the classic, they do not consider the poker game to be overly similar. For instance, classic players have 32 dominoes and can create up to 16 pairs when trying to secure a best score of nine, with the 1 removed from scored of 10 or higher.

The world’s most popular poker game bears a much greater resemblance, as players can create a hand from seven cards. However, it is different in that players have two of their own cards plus five community cards. That being said, Texas hold’em is different because it features human players instead of a set dealer.

This variant gets closer to Pai Gow poker, given that players can directly challenging the dealer on each round. But that is where the comparison ends, as casino hold’em calls for players to begin with two of their own cards before creating their best hand with three additional cards.

There is an abundance of odds associated with table games, so it is more efficient to compare the most common house edge for each. Quite simply, this is to outline the advantage that the dealer has over players. For reference, check out the values below:

You should now have the confidence to give Pai Gow poker a try, even if you play with basic strategy. And don’t forget to come back if you need to revisit any section of this guide.